This was from Steve Fettke

I learned on a mil. spec. system. In pirate jumping it has a number of advantages. You have a set of 5 individual cords that you group together in a set of 3,4,or5. So you can jump from 100-250lbs with one set of cords. They are covered in Nylon (or Cotton) sheaths that protect them from dirt when you lay them down. Also, the redundancy of multiple cords, as well as the sheaths which act as a static back up in the case of over elongation, provide (I believe) a greater degree of safety. Traditional mil. spec. cords have an elongation of about 110%. By the way, in the "bungy or bungee" page a common mistake is made about this word. Elongation refers to the change in length of the cord, not the ultimate loaded length. So 110% elongation in a 100 foot long cord is 110 feet for a total stretched length of 210 feet, or 2.1 times it's original length. Since mil. spec. cord stretches less, a longer length is often used, resulting in more initial free fall.

After the 1995 X-games I realized that, because of the bigger rebounds, more acrobatic stunts were possible on all rubber cord. So I set about learning how to build that type of cord. New Zealand style cord is built with a ribbon, about 3 inches wide, composed of a number of stands of rubber. This is wrapped around teflon spools, tied together, stretched to it's ultimate elongation and wrapped down it's length, with the same type of rubber, to hold it all together.

The actual building of an all rubber cord, or tying loops on the ends of mil. spec. cord is not something that can be learned through words only. You need to learn first hand from someone who knows what they are doing. So you can watch them and they can check your work. The same goes for the bungee system, whether it's a lowering system, a man basket on a winch, or a raising system, you either need to learn it first hand or start from scratch with the engineering done on all the materials, and many practice "jumps" done with sandbags.

New Zealand specification cord has an elongation of 200-300%, i.e. it will stretch to 3-4 times it's original length. I believe the Kocklemans came up with the idea of building a length of webbing into all rubber cord. This back up is the length of the ultimate elongation of the cord. This gives it the redundancy that I like. The Kocklemans build their cords thicker than New Zealand specs. This gives the cord a long life (over 1000 jumps) but results in higher G-forces, and less ability to do rebound tricks. I believe their elongation is 150-200%.

It is difficult to determine actual elongation because many people will tell you the length of the all rubber cord before it is stretched out and tied down it's length. This makes the cord a little longer (about 5-10%) than when the ribbon is first layed around the spools. For example, for a 100 foot jump you would first lay the rubber out at 22.5 feet, which would need to stretch to 4.5 times it's original length to get to 100 feet. But once the cord is stretched and tied it would be about 25 feet long. So then it would need to stretch to 4 times it's length to reach 100 feet.

Well, I'm starting to ramble so that's all I have to say about that. Here's some info for your bungee sites list. Total Rebound and Yesh in California are friends of mine that are no longer in the business. My company will be active again in Northern California in December 1996. I'll update you later. The sites at Raging Waters and Big Bear were both temporary stops for Thrill Sport Productions, who produces our show in Taiwan. They will have arches at state fairs this summer in Wisconsin, Michigan, Ohio, and other places. Their Corporate office is 88 A Elm St. Hopkington MA 01748 Tel.(508)435-0420 Fax(508)435-6594. Total Hard Core Gear, in Redding California, makes what I think are the best harnesses. They make both ankle harnesses and chest and waist harnesses. They are fleece covered, well padded, and use self locking parachute buckles, which are easy to use and secure. Sorry, I don't have their address or phone number. I used the N.Z. Bungy Knot ankle binding at the 95 X-games and didn't like it. Like you said, you feel trapped. Also, the force is transferred to your legs with a 1 inch strap, which, even though padded, digs in after a while. The worst thing though is that when it tightens there is a 2 foot strap of webbing hanging off which can wrap around your calf on a rebound and then your are hanging from an unpadded 1 inch strap which really abrades the skin and can cause hematomas. This happened to three of my friends at the '95 Extreme Games.

The European/New Zealand cords described above look like this

Steve who wrote that section above believes that the US mil spec system is safer because of the extra redundancy, but the Euro cords do have the advantage that they can be inspected after each jump for signs of rubber failure or possible problems. The sheath on Mil spec cords prevents this. Some Euro cords have an extra static line built into the core to prevent over stretch and provide extra backup. The term Euro cord is a little misleading - this cord is used and made in many countries.

Mil Spec cord is cord that is made to US military specifications, these specifications were designed to hold down tanks on boats and in planes rather than to suspend adrenaline junkies jumping off bridges. As it turns out they work rather well for both!. 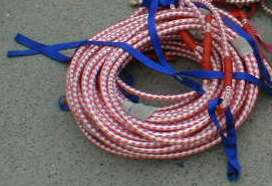 Here is some mil. spec cord made by Glenn from Bungee Experience. The pink/white stuff is the cord, the blue webbing is attached in a very special way to the ends of the cords so that carrabiners can be attached to each end. The way the end of the cord is connected with a piece of webbing is called termination. The Red Tape is part of the special way the cords are terminated.

Lots + lots of people have asked me for bungee cords specs and I just got emailed this from J Kockelman (cheers!)

Most Bungee Jumping Cord is made from "natural rubber" whose physical constants are in most college libraries. The most common bungee cords stretch 2 to 4 times the original length and the jumper feels 2.5 to 3.5 G's.

If you know any more then let us know on our Facebook page!

I found a page on bungee.com (link expired) which had a technical paper on Bungee jumping.