The British Elastic Rope Sports Association (BERSA) was founded by enthusiasts involved in Bungee Jumping since the early 1980's, and exists to promote safety by regulation of the sport in Great Britain. It is responsible for ensuring the highest standards of safety are maintained at affiliated Clubs, and for training and licencing their staff. Furthermore, because BERSA is a non-profit making body, it is able to act as a centre of expertise, encouraging an on-going programme of research and development of the sport

What is the Code of Safe Practice?

Founder Members of BERSA have worked in consultation with the U.K. Government's Health and Safety Executive, and an independent advisor from the Safety and Reliability Division of the United Kingdom Atomic Energy Authority who has an interest in risk entertainments, to produce the BERSA Code of Safe Practice. The Code provides a comprehensive safety system for the conduct of Bungee Jumping by which BERSA affiliated Clubs operate. 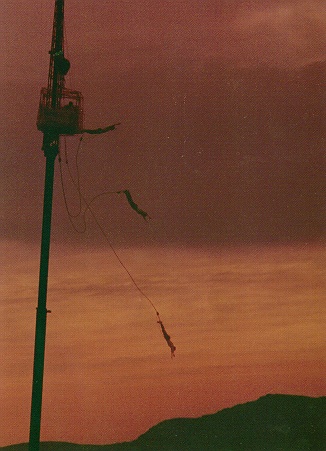 There is no doubt that leaping from a platform in excess of 150 feet above the ground is potentially dangerous... In term of safety, Bungee Jumping is like most exciting sports; it is dangerous if you do it wrong. BERSA exists to ensure that affiliated Clubs do it right, in order to reduce the risks as far as is possible.

Why Bungee Jump with a BERSA affiliated Club?

A current BERSA Licence to Operate is the only assurance that staff and equipment are independently assessed as being competent, that comprehensive safety procedures are in operation at all times, and that the Club is subject to unannounced inspection by specially trained Safety Officers, to ensure the high safety standards are maintained at all times.

How can I check if a Club is a member of BERSA?

At any BERSA affiliated Club, the operatives licences and the Club Licence to Operate are available for inspection. However, if you are in any doubt prior to a jump, please do not hesitate to contact BERSA to confirm a Clubs affiliation.

How can I raise money for charity through BERSA affiliated Clubs?

All affiliated Clubs will provide sponsorship forms on request, thus you can raise money for the charity of your choice.

How did Bungee Jumping start?

Bungee Jumping was inspired by the vine jumpers of Pentecost Island in Vanuatu (formerly the New Hebrides) in the Pacific Ocean, where it is understood to be both a rite of passage into manhood, and a fertility rite performed to ensure a good yam harvest. Modern Bungee Jumping began with four simultaneous jumps off the Clifton Suspension Bridge in Bristol, England, on the 1st April 1979.

Where is my nearest affiliated Club?

BERSA Clubs operate regularly at sites throughout Great Britain. For your own safety, experience this exciting new sport with confidence in their most capable hands.

If you have any further queries, do not hesitate to contact BERSA at the following address:

It has been brought to my attention that a few clubs in the UK are displaying and using the BERSA logo and Name without being BERSA affiliated. If you are unsure as to a club's BERSA affiliation Contact BERSA at the address above.